And the Word was made flesh, and dwelt among us, and we beheld his glory,
the glory as of the only begotten of the Father, full of grace and truth.

I had the privilege of hearing the Chicago Brass at my church on Sunday.  Christmas just wouldn’t be the same without hearing these talented musicians harmonize beautifully with crisp songs of Joy, that charge the atmosphere with the season of excitement and great expectation.

The sermon was also uplifting and meaningful.  The text was taken from John Chapter 1.

Allow me to quote from the KJV.

1 In the beginning was the Word, and the Word was with God, and the Word was God. 2 The same was in the beginning with God. 3 All things were made by him; and without him was not any thing made that was made. 4 In him was life; and the life was the light of men. 5 And the light shineth in darkness; and the darkness comprehended it not. 6 There was a man sent from God, whose name was John. 7 The same came for a witness, to bear witness of the Light, that all men through him might believe. 8 He was not that Light, but was sent to bear witness of that Light. 9 That was the true Light, which lighteth every man that cometh into the world. 10 He was in the world, and the world was made by him, and the world knew him not. 11 He came unto his own, and his own received him not. 12 But as many as received him, to them gave he power to become the sons of God, even to them that believe on his name: 13 Which were born, not of blood, nor of the will of the flesh, nor of the will of man, but of God. 14 And the Word was made flesh, and dwelt among us, (and we beheld his glory, the glory as of the only begotten of the Father,) full of grace and truth. 15 John bare witness of him, and cried, saying, This was he of whom I spake, He that cometh after me is preferred before me: for he was before me. 16 And of his fulness have all we received, and grace for grace. 17 For the law was given by Moses, but grace and truth came by Jesus
Christ.

With the fresh reflection of the brass instruments stirring in my heart, I started to wiggle my way through the complex texts.  It seemed deeply profound, yet there was a message brewing up from this passage.  It seemed to speak more to me as I climbed over each term, trying to follow the intended message and envision their content in a more meaningful way.

1 In the beginning was the Word..”Word” is a Greek term for “Logos“.  This has a broad meaning and application.  It is where we get logic and logistics.  It bore the concept of order, structure and was applied to the use of science in the past.  It is the “way in which all things operate and function”.  It is the personification of thought, as in God’s thought and envisioned grace that provided a son for our salvation.

3 All things were made by him; and without him was not any thing made that was made.

4 In him was life; and the life was the light of men.

Wow.  What a concept.  So, what now exits is because of him and in him was life.

So, I tried to consider how to represent this.  In Him…Life.  Yes, I thought of a channel, a passage, a tube.  Yes.  Then I thought of things existing…which began as a thought.  It is like something evolved from a conception of God’s mind.  It was like an opening, a widening, like a  bell of a horn!

Then the message developed into a an image.  It became more meaningful and applicable. 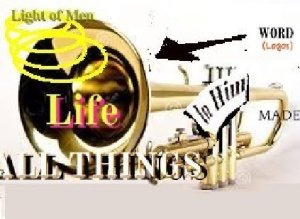 Consider this.  In Him is life..like the breath of life.  It started with the thought and intent of Logos. It is expressed in all things, like the bell of the trumpet.  Through the music of this brass instrument, it presents a song… a song of salvation…a song of invitation.  It is the light of men, to those that hear and attend to the music.  The light of men bring them to Life itself…as it was meant to be; the life we were meant to have, in meaningfulness.  I researched it further and found a similar meaning.

The trumpet was used in Communication before its use as a musical instrument. It was primarily a signal, either for soldiers, hunters, or to announce someone’s arrival. The fact that the trumpet’s sound carries a long way added to its value in that respect.

What is the Significance of Trumpets in the Bible?

Not only was this instrument used as a feast trumpet to gather people together to celebrate, it was used in processions as well. The walls surrounding Jericho crumbled when people marched around them blowing shofars. It is said that the second coming of Christ will be announced with the sound of this instrument. The first day of the seventh month was termed a “memorial of blowing” or a “day of blowing” in the Old Testament. This day is called Rosh Hashanah and is celebrated in the Jewish religion.

Also, in scripture I found a reference to God’s announcement as a trumpet.

Psalms 47:5
5 God is gone up with a shout, the LORD with the sound of a trumpet.

The message goes out to a dark world, or to many who do not regard the light.  If they did see and value the light, it will lead them to Life itself.  So, here is the message as revealed in scripture.

Behold, wisdom calleth, and understanding sendeth forth her voice, 2 On the top of high places, by the wayside, at the house where there are many paths doth she place herself. 3 Alongside of gates, at the opening of the city, at the entrance of the town-doors doth she call loudly, 4 Unto you, O men, I call, and my voice goeth forth to the sons of men, 5 Learn, O ye simple, to understand prudence: and, ye fools, be ye of an understanding heart.

8 In righteousness are all the sayings of my mouth, there is in them nothing crooked or perverse. 9 They are all evident to the man of understanding, and correct to those that have obtained knowledge.

14 Mine are counsel and sound wisdom: I am understanding; mine is might. 15 Through me do kings reign, and chieftains give decrees in righteousness. 16 Through me do princes rule, and the nobles, even all the judges of the earth.

In closing, I challenge each of you not to get caught up with the anxieties of the season but to listen for that music, to follow the melody, the very light and discover the Life which you deserve, as was meant to be.  May you all have a Happy and Peaceful Holiday season my friends and family!